The National League of American Pen Women, Inc. (NLAPW) is the nation’s oldest organization for creative women, founded in 1897 to encourage, recognize and promote the production of creative work of professional standard in Art. Letters and Music. Our members are journalists, painters, choreographers, sculptors, poets, illustrators, songwriters– just to name a few of the creative fields we encompass.

Beginning with 17 charter members, the organization now is comprised of branches throughout the U.S. and over 2500 members. Each branch holds regular meetings and offers workshops, art exhibits, concerts, seminars and outreach programs. NLAPW membership provides the opportunity to network with other arts professionals, enter juried exhibits and contests and participate in professional enrichment programs. If you are a professional in a creative arts field, you will find a place with the NLAPW to advance your own creative endeavors. You will join the stream of women dedicated to the Arts, such as Vinnie Ream, Eleanor Roosevelt, Eudora Welty, Margaret Mitchell, Grandma Moses, Pearl S. Buck and many others who have listed this prestigious organization among their professional affiliations. 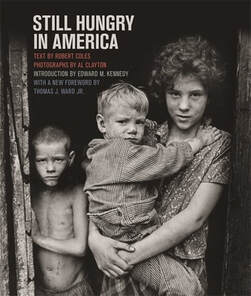 An Al Clayton Retrospective: featuring the “Icons” and "Still Hungry in America” (50th Anniversary) series (with work from Jennie Clayton)

Throughout his lifetime, Clayton‘s work focused heavily on subjects related to the people, culture, and music of the American South. His photographs have appeared in Look Magazine, Life, Time, Newsweek, U.S. News and World Report, The New York Times, Esquire, and others. He received numerous awards, including the Overseas Press Club Award for his 1969 depiction of the Biafran War in Nigeria, plus many Clios and Addys for his commercial work. Clayton published over a dozen books, including the recent re-release of Still Hungry in America, and made a film of Pentecostal snake handlers, "In Jesus’ Name". He was drawn to music and photographed for Rolling Stone and record companies including Epic, Columbia and Capricorn, producing over 100 album covers for Bob Dylan, Johnny Cash, George Jones, Townes Van Zandt, and Tammy Wynette, among many others. In 1974, Clayton toured with the Allman Brothers, recording their most private and public moments through his lens.

His work is featured in the Ken Burns documentary, "Country Music". Some of Clayton's original prints are being made available by the family. Limited edition, fine art prints are also available. 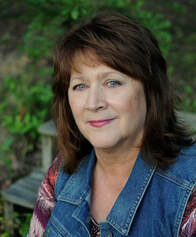 Debra’s Artist Statement: I have loved color and creating since I was a child. Rainy days spent inside coloring or painting were my favorite activities. Not much has changed, a rainy day remains an invitation to play some beautiful music and create at the easel. As a young adult I married and since we lived in a rural area, it was not easy or affordable to take art classes. So I worked from home while raising my family, studying books and working first with watercolor, then pastels and finally oils.

Each medium had its own strengths and I now use something from all of them creating my paintings. As my family grew, I went to work and began to take life classes in the evenings after my youngest child left for college. It was so exciting to be able to learn from wonderful artists. I painted at night and on the weekends painting in oils and pastels.

I was president of Southeastern Pastel Society for seven years and came into contact with some talented painters. The connections I made with other artists was and continues to be an important part of finding myself. The desire to paint from life sent me outside into the landscape to paint plein air.

Painting plein air has enhanced my work beyond what I ever could have imagined. I continue to paint plein air for my own education, working on location and bringing my information back into the studio where I remember colors, sounds and feelings that no photograph can duplicate.

I have found my passion in painting the landscape in oils and pastels with all of its many moods, trying to share my vision with the viewer. My greatest compliment is when someone says my paintings make them feel like they are there. I particularly love painting the coast and water anywhere.

Most recently, I was accepted into the 19th Annual American Impressionists Society (AIS) Exhibition and effective January 1, 2019 I am now a Signature Member of AIS. I was also honored to be accepted as a signature member of the American Society of Marine Artists (ASMA). My paintings have been included in the 27th National Oil Painters of America Exhibition, American Society of Marine Artists Invitational at Principle Gallery, my painting The Crossing won the Best Building in a Landscape award in the June/July 2017 PleinAir Salon competition, Oil Painters of America Eastern Regional Exhibition 2017, American Impressionists Society Small Works Show 2016, and I am one of Pastel Journals December 2016 issue, 10 Artists to Watch.

I think we all have a bucket list and one of the things on my list was to be an Artist in Residence (AIR) in Acadia National Park. I was awarded the AIR in 2012 and painted in the park for 2 weeks in the fall. I taught weekly classes at Chastain Art Center in Atlanta GA for 14 years and conduct my own workshops a few times a year locally and along the coast. 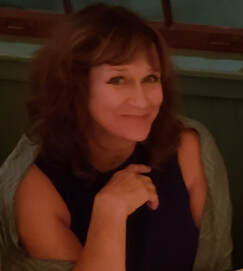 Margaret’s Artist Statement: "At a moment in 1970, when a model dropped her robe and stood naked in front of a class of wide-eyed eighteen year old art students, I found something in life I loved – the challenge to draw the living, breathing, continuously moving landscape of the human body. What started out as a challenge quickly became a passion. Ten years later, when I happened upon Kate Fetterolf's dynamic pastels at a local exhibition, I knew I had discovered my medium.”

After 30 years working in pastels, I've spent the past few years transitioning to oil painting. I wanted a different tactile experience, I was tired of dropping and stepping on expensive pastels (there goes another $6.00), I felt I was doing the same thing over and over again. I wanted to learn to paint.

It's only until very recently that I have felt like I was actually 'getting it.'  I realize there is an enormous amount yet for me to learn, which is quite daunting, but at the same time quite exciting. My award at the recent National Oil and Acrylics Painters Society Small Painting Exhibition 2019 for Best Impressionism has been a great encouragement (especially as I look at all my bad paintings sitting in my studio--how much have I spent on canvases and paints and Gamsol and Viva paper towels and latex gloves and workshops and... oy veh.

I have lived in Atlanta, GA, since my family moved from Long Island, New York, in 1960. I attended the Atlanta College of Art at the High Museum (never graduated) and furthered my studies under painters Roman Chatov, Kate Fetterolf and Jim Richards. I have made my living for over 25 years selling my work and teaching. 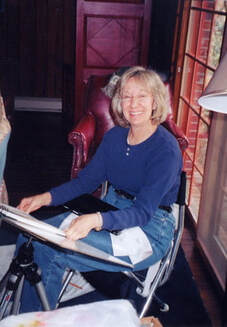 Dede Collicott has spent over 20 years pursuing her passion for art and painting. Although a native of Florida, Dede’s formal training was done in Colorado, where she received a Bachelor of Fine Arts degree in Painting from the University of Denver, and a Degree in Art Education from the University of Colorado. Her early work was heavily influenced by the stark vistas of the west, where she focused on abstract landscapes, rendered in mixed media. Since relocating to Georgia, she has turned more to representational art in oil media, and especially enjoys the challenge of plein air work, with an emphasis on capturing the soft lighting of the lush, southern landscape.

Throughout her career, Dede has continued to study painting through classes and workshops with a number of well-known professionals. She has been particularly influenced as a result of study with well known local portrait artists, Marc Chatov, and Jim Schell. Also important, have been a variety of workshops and classes with nationally known artists  including Bill Davidson, Barbara Jaenicke, and Charles Sovak.

Dede is an active member of the Atlanta Fine Arts League, the Atlanta Artists Center, the Brushwork Society, the Quinlan Visual  Arts Center, Women Painters of the Southeast, and the Plein Air Fine Artist Alliance of Georgia. 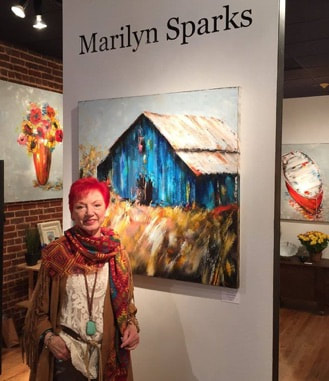 Marilyn Sparks’ passion for old barns, southern landscapes, and fields of flowers comes from her southern heritage.  Having always lived in the South, she paints what she knows and loves, what she remembers from her youth, and the pastoral scenes that surround her every day.

The self-taught artist is continually evolving, recreating and reinventing herself through her bold barns, bright florals, charming children, and vibrant  landscapes.  Her years of experience with color, texture, and proportion during her extensive fashion career are evident in the way she combines these elements on canvas.
Marilyn Sparks paints in her studio in Cumming, Georgia where she happily sheds her fashion image for a painter’s smock.  Her work can be seen in various galleries throughout the southeast including the Taylor Kinzel Gallery in Roswell, GA; High Country in Blue Ridge, GA; The Summer House in Highlands, NC; Red Bird Gallery in Seaside, FL; and six Grand Bohemian Galleries.

“Making the world a brighter place...one painting at a time.”

Brought to you by the staff of the Q and supporters like you.
© 2021