The Georgia Art Educators Association is a professional organization of art educators consisting of over 1,700 members in Georgia and is affiliated with the National Art Education Association. Their mission statement is to advocate for the highest quality visual arts education and provide for the advancement of knowledge through service, leadership and research. This exhibition will showcase their members’ artwork. 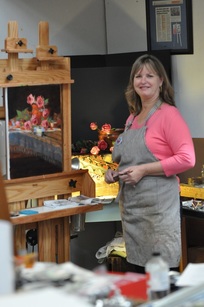 Sharon concentrates on painting in oils and paints still lifes in a representational style, as well as landscapes of the North Georgia and Coastal Georgia regions.

She is a member of the Quinlan Art Center, Georgia Art League, American Society of Marine Artists, and the Oil Painters of America. Sharon currently has a studio at the Blue Angel Studios in Gainesville, Georgia. 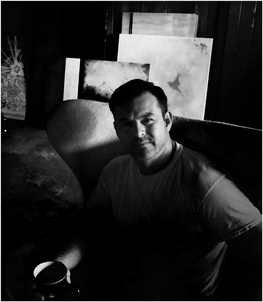 ​“Of the Mountain” encaustics by Clayton Santiago

Born in rural Arizona on historic Route 66, Clayton would spend much of his childhood living and traveling the southeast. From the tobacco fields of Virginia to the mountains of North Georgia, Clayton was greatly influenced by the people, landscape and heritage of this part of the world; the influence is undeniably evident in his creations.

Clayton’s work is a summary and manifestation of his experiences, exposure, belief and love for the southern landscape. Through a process of layering epoxies, gold leaf, paint and tar, he brings to life elements of his rural heritage with sophisticated modernity. Built over wood, his paintings are almost sculptural in effect. His earthen colors are rich and sumptuous, weaving together vintage motifs with abstracted natural imagery. Through organic compositions Clayton celebrates the spirit of his faith and a deep appreciation for the natural world.

Santiago’s works have been seen in Elle Decor Magazine, Atlanta Homes & Lifestyles and the St. Regis Hotel. He has had pieces on display at Gwinnett Church and other North Point Ministries Inc properties, The Haen Gallery in Asheville, North Carolina, Quinlan Visual Arts Center in Gainesville, Georgia, the Emily Amy Gallery in Atlanta, Georgia and many more. 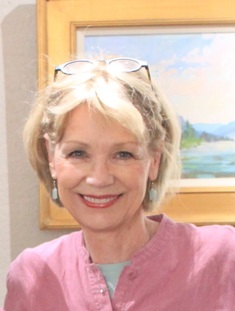 Brenda Losey Sumpter was born into a farming community in Pawnee City, Nebraska. Her father was a corporate engineer so she grew up in several different states North and South. Her parents instilled in her a love for nature and beautiful things! She always knew she wanted to be an artist. She attended Hussian School of Art in Philadelphia where she studied illustration and design. While in Philadelphia she was hired out of school to illustrate on National accounts. She moved to Atlanta, GA in 1972 and on the way made a brief stop in Washington DC. She was commissioned to illustrate for Smithsonian Magazine and it turned into a 20 plus year association! In Atlanta she continued working on local and national illustration assignments! Her clients included AT&T, The Coca-Cola Company, The Federal Reserve Bank, France Tourism, US Army, Turner Broadcasting, CNN, UPS and many more! She has always loved to paint, has won numerous awards and is held in many private and corporate collections