Sergio will focus on the techniques and principles of plein air painting of coastal marine landscapes. Sergio Roffo is a member of the Guild of Boston artists’, Elected as an Associate Living Master by ARC Salon and a Copley Master at the Copley Society of Boston. Mr. Roffo has won countless national awards and is widely collected.

In the morning we will begin with Sergio discussing the aesthetic issues and techniques of art as he demonstrates and completes a field study, encouraging the fellow artists to observe. “Sometimes you learn more by observing and memorizing than actually painting. While I strongly encourage the students to observe my demonstration, they will have to option to paint alongside of me.” After the demonstration students will receive individual personal instruction and encouragement while completing their painting “Alla Prima” (in one sitting). The objective of this three day course is to sensitize the class to the aspects of outdoor painting, including: 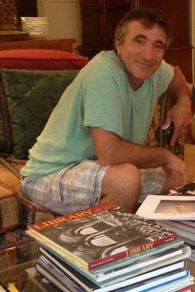 Sergio Roffo, painter (1953-), has been inspired by the work of American traditional painters such as Inness, Fitz Henry Lane & Albert Bierstadt, among others. Roffo's representations of coastal landscapes reveal a luminous, masterful feeling. As you view his art, you will discover a precise sense of value and atmospheric perspective that conveys a relaxed sense of calmness; a characteristic that defines and informs all of his works. Sergio Roffo's captivating depictions of the New England landscape have been included in a variety of museum exhibitions and have earned him many, many awards. Please see Awards page.

In 1994, Roffo was the winner of the Massachusetts Duck Stamp, after a friend suggested he try. Not being a wildlife painter, Mr. Roffo accepted the challenge and won on his first attempt, where others spend years trying. He holds the honor of being one of the youngest artists to be designated a“Copley Master” by the Copley Society of Boston. An elected “Fellows” member of the American Society of Marine Artists and an elected member of the Guild of Boston Artists, Sergio's work is included in many private and publicly owned collections. He has also been selected for inclusion in numerous publications, such as Fine Art Connoisseur,  Cape Cod Life, Down East Magazine,  American Art Review  and has  also been featured several times in American Art CollectorMagazine,  And  was selected "Artist of The Year" for "Pops By The Sea" by the Arts Foundation of Cape Cod.The youngest of six children, Sergio was born in San Donato Italy. His family immigrated to Boston where sometime after high school he attended Vesper George School of Art in Boston, majoring in Fine Arts and Illustration. After graduation Mr. Roffo freelanced as an Illustrator for some time and became very successful after acquiring and agent in NYC.  The demands of Illustration and burning the midnight oil took it's toll on Sergio and eventually turned to Fine art, studying under the Boston School painters  Robert Douglas Hunterand Robert Cormier ​where Mr. Roffo honed in on his traditional drawing and landscape techniques.

A serious artist, Roffo continually strives to capture the elusive essence that is Nature.“My mission is trying to convey to the viewer the spirituality and sacredness of my work, indicating the harmony of nature through color and light. As artists, our creative goals will never be accomplished. We will always be students of nature, because nature does it so beautifully. We live each day passionately, others only dream of!”

Mr. Roffo resides in Scituate, MA. with his wife where he continues to strive for excellence every day. Literally observing 24 hours a day while maintaining a balance with domestic duties as a husband and father.
His other interests include gourmet cooking, listening to opera and classical music, gardening, playing tennis and sailing his 18ft. Marshall Sanderling cat boat.

Mr. Roffo accepts commissions of any size anywhere in the world.