OFF THE WALL - BETTY BEASLEY 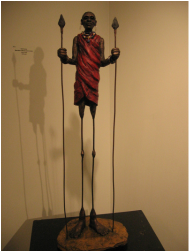 _ Betty’s sculptures are from the heart. She has developed a reputation for her fine work and most recently won Best of Show at the Georgia Marble Festival and also received the People’s Choice award. Her work can be found in many private and corporate locations.

My love of horses must have started when I was born in Brooklyn, N.Y. My mother saved a picture of a horse that I drew at age two. It was recognizable. While other kids were chewing their wax lips or gum, I was busy shaping mine into tiny herds of Arabian horses. At four, my father took me to see Man 'O war, the immortal race horse - a still vivid memory. As I touched his nose, my life began taking its turn. Horses were objects of my imagination. But I was a city girl and they became real to me through drawing - first with crayons, then moving to pencil, ink and paint. As I grew up, I experimented with different forms of art, things such as stained glass, fabric art, and acrylics on canvas. It wasn't until my children were grown that my sculpting skills fully awoke.

Trained in classical sculpture by Teena and Don Haugen, I assisted them in making a life-size mule, sharecropper and young boy, which have been installed at the Georgia Agricultural Center in Perry, Georgia. I have demonstrated the making of sculpture at the Georgia Heritage Center and taught a clay patina class at the Abernathy Arts Center. I am currently a member of the Dawson County Art Association and the Blackberry Creek Artists Association and Gallery. I have shown and won various juried shows and exhibits.

Inspiration still comes daily from life on our north Georgia fame with my husband, Winn, dog, Carlos, cat, Tess and our three Arabian horses. The love of horses and art is now passed on to our grandchildren.

Hopefully my work encourages people to use imagination, to feel joy and to smile! 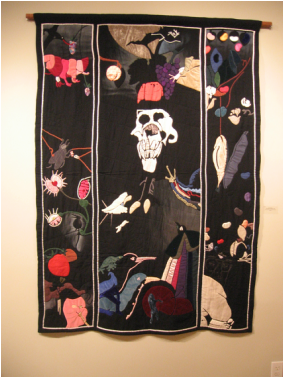 Bruce Bobick earned an M.F.A., the terminal degree in Painting and Drawing, from the University of Notre Dame in South Bend, Indiana.  He also holds both a Bachelor’s and Master’s degree in Art Education from Indiana University of Pennsylvania.

He has taught at the State University of West Georgia from 1976 until 2005, and was the chairman of the Department of Art from 1979 until he retired in 2005.  From 1968 until 1976, Bruce taught painting and drawing at Western Illinois University where he was a tenured associate professor.  His other teaching experience has included the University of Pittsburgh’s Semester-At-Sea program in 2003; the Guangxi Teachers’ University in Guilin, Peoples Republic of China; the University of Georgia’s Studies Abroad Program in Cortona, Italy; and the Arrowmont School of Arts and Crafts in Tennessee.  He also was an artist-in-residence at the High Museum of Art as part of the Atlanta Partnership for Visual Arts and Learning, and at the Hambidge Center, Rabun Gap, Georgia.

He is a member of the National Watercolor Society in Los Angeles, and the Watercolor U.S.A. Honor Society.

His work has been included in 222 juried exhibitions including “Watercolor, U.S.A.” eleven times, the latest being in 2010; the National Watercolor Society’s juried exhibitions ten times, where in 2010 one of his paintings won the Silver Star and Purchase Award for the NWS Permanent Collection; the National Academy of Design in New York twice; and the 164th Annual American Watercolor, Prints and Drawing at the Pennsylvania Academy of Fine Arts in Philadelphia.

Bruce has held 85 solo exhibitions, the most notables being at the American Cultural Center of the U.S. Embassy in Brussels, Belgium and the Snite Museum of Art at the University of Notre Dame.  His work has also been included in 97 invitational exhibitions, including “From the Avant-Garde to the Present Day” in St. Petersburg, Russia;  "From Sea to Shining Sea," at the U. S. Embassy in Singapore, from 2006-2009, “Watercolor, Now” six times; and “Southern Quilts:  A New View.”

His many commissions include the bedspread designs for the All-Star Sports and All-Star Music complexes at Disney World in Orlando, Florida; a fourteen foot by ten foot oil painting for the Georgia Sports Hall of Fame in Macon; a watercolor painting for the Southeastern Conference (SEC) Football Officials Headquarters in Birmingham, Alabama; two large outdoor stainless steel kinetic sculptures in Carrollton, GA; and a 4’ x 6’ wall-hung quilt for the Omni International Hotel in St. Louis, Missouri. 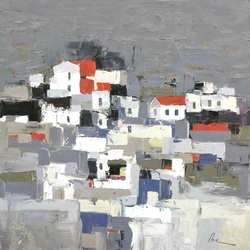 New York-based Nigerian artist, Onyeka Ibe has achieved international recognition for his dramatic approach to painting. Described as one of the most exciting young painters to emerge from Sub-Saharan Africa since the 1990’s, he was awarded “The Best SOLO artist of the Year 2006” at the international Artexpo New York. In July 2007, Art Business News profiled and named him as one of “Today’s Top Artists”. Ibe looks for inspiration in natural and humanistic traditions of contemporary realism and abstraction.

Ibe was born not long after the end of the Nigerian Civil War and grew up in a developing democracy that was abruptly terminated. Violence became the order of the day. As a youth, Ibe realized that his artist sensibilities could move him in either two directions – either to fight back at such dehumanizing situations, or to escape inward by searching for elements that reflect humanity. He chose the latter. 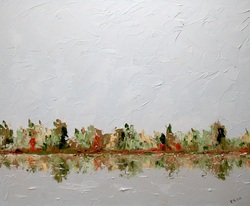 _ World-famous “pear artist” and all around nice guy.

Ronald developed an interest in art while attending free drawing classes given by the Cleveland Art Museum. He has always been intrigued by the realism and bold colors in still life paintings created by the Old Masters.

Ronald paints landscapes and still life compositions in both pastel and oil.

Individuals and corporations throughout the country collect Ronald’s work.

In recent years, the artist has been identified with his world famous pear paintings, or “still life with a twist.” Instead of surrounding the pears with mundane kitchen objects or household treasures in a static composition, the pears take on human attributes. Although the backgrounds will vary, the pears are hovering in family groups, standing alone or falling from the sky.

The landscape series “Reflections” is a display of the artist’s versatility, a sea of landscapes rendered in oils.

ACROSS MANY WATERS - SANDRA LANDERGOTT 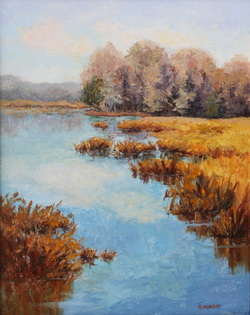 _ Sandra is a member of the National Association of Women Artists, the oldest art organization for women, founded in 1889 in New York by artists such as Mary Cassatt.

She is an award-winning artist and active member of the Georgia Art League and member, exhibitor and volunteer at the Quinlan Visual Arts Center.

Currently working in oils, she is proficient in watercolor, pastel and encaustics.

Sandra has been published in Palm Beach Post-Times and the Sun-Sentinel of Martin County as well as the Gainesville Times and has painted in Florida, North Carolina, North Georgia, Ireland, France and Italy. Her art is in private collections throughout the United States, and Europe.